This is my first Blog & Post, I thought I start off with the good stuff first and work my way down to all the Scream stuff that I have collected over the years. Hope you all enjoy! 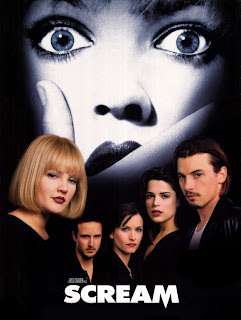 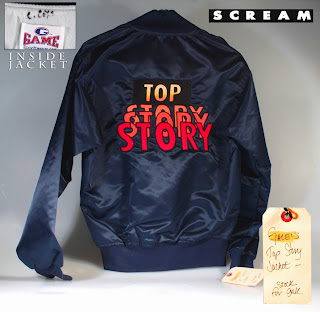 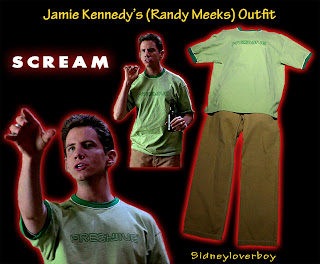 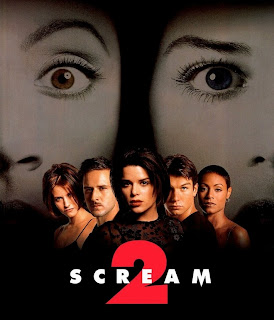 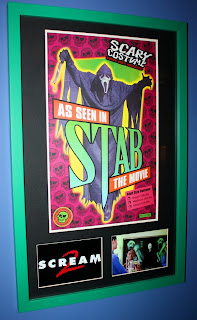 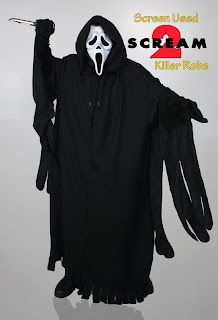 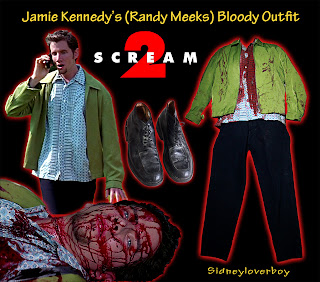 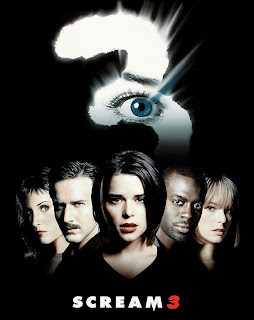 You can see the sticker on Sid's printer, & Sidney's work folder. 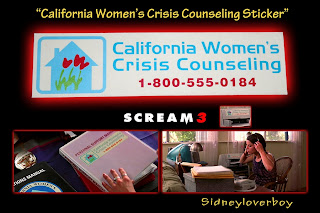 
This prop can be seen just before Gale meet Detective Kincaid at College Campus in the beginning of the film. 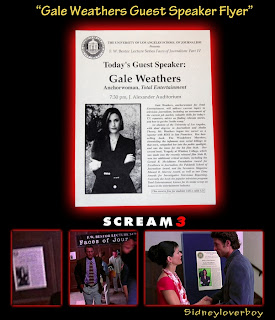 This prop is clearly seen on screen at various points in the film and held by various characters. We see them being held by Dewey, Gale, Detective Kinkaid, and then also hanging on the wall at the police station. These get a LOT of screen-time, are screen-matched, and are integral to the plot of the film. 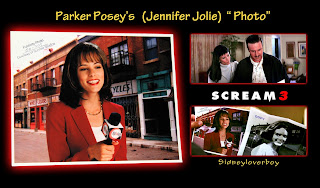 This photo of Maureen Prescott a.k.a. Rena Reynolds is an original photo print prop in Scream 3. The photo the actors are holding in the film was a xerox copy. It clearly can be seen on screen at various points in the film and held by Dewey, Gale, Detective Kinkaid, and then also hanging on the wall at the police station. These headshot gets a LOT of screen-time. 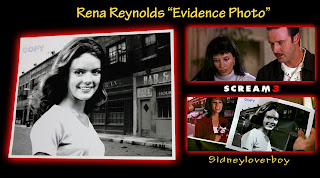 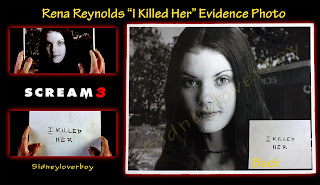 This is not a screen used prop. This is the same booklet used in the film. 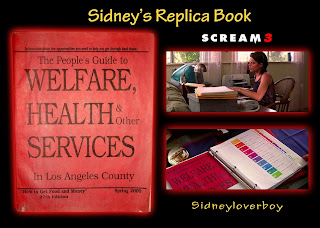 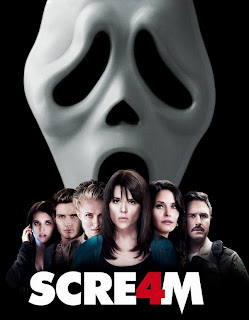 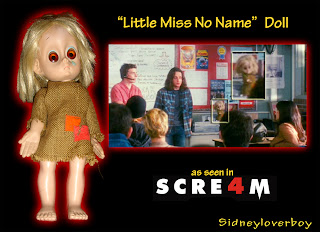 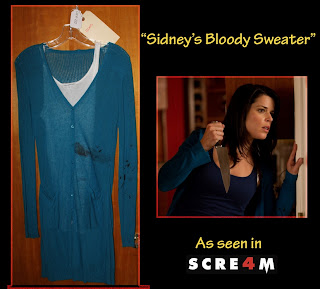 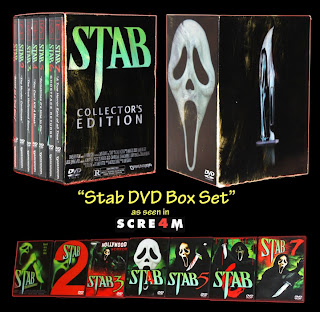 This is the "Bloody Chair" that (Aimee Teegarden) Jenny Randall was tied up to in the original opening for Scream 4. Comes W/ C.O.A. 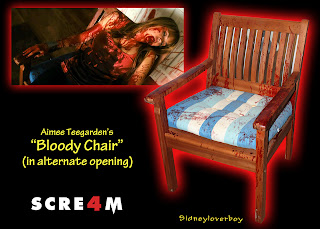 Gale Weather's Books
This is the complete set of Gale Weathers Books from the Scream films. All come with C.O.A's

Sidney's "Out Of Darkness" Book 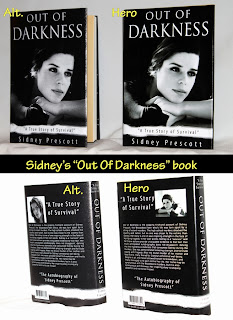 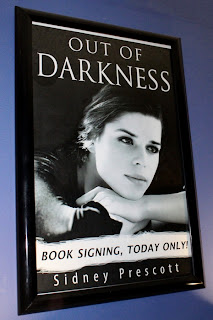 This "Stab-A-Thon" Flyer is an article actually used in the making of the motion picture "Scream 4". It was custom made for the production, and obtained directly from production. Comes W/ COA The Horror Museum 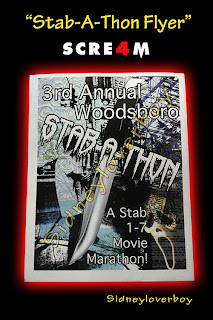 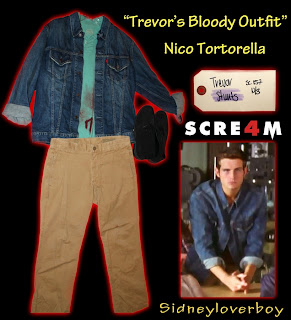 This is the bloody stunt costume worn by Neve Campbell in her role as Sidney Prescott in Scream 4. This costume was worn in the finale of the film during the fight between Sidney and Jill. It consists of a bloody hospital gown with white with teal striping and red, blue, and green droplet design with teal ties on the front and purple pants with ties around the waist and elastic around the ankle. The costume comes with it's original C.O.A and wardrobe tag from Premiere Props. 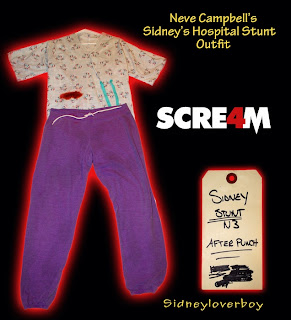 This is a bloody stunt costume worn by Courtney Cox-Arquette in her role as Gale Weathers-Riley in Scream 4. It consists of an Anne Taylor shortened jacket torn on the back and at the sleeves, a black James Perse tank top bloody at the neck and torn at the shoulder from when Gale was stabbed, and black denim straight leg skinny Paige Denim jeans. The tank top and jeans were worn in two different scenes. First in the Media Club scene and then at the Stab-a-thon barn where Gale was stabbed by the Ghostface Killer. The white jacket though was only worn in the Media Club scene with the tank top and jeans. The tank top is ripped and bloody. The costume comes with it's original COA and wardrobe tag from Premiere Props. 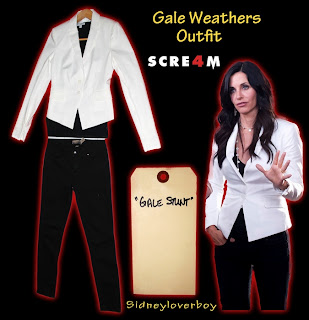 This is Marnie (Brittany Robertson) stunt double's, extremely bloody Outfit. This wardrobe was used in the Alternative Opening (Deleted Scene) in Scream 4. Comes with Tags & C.O.A. 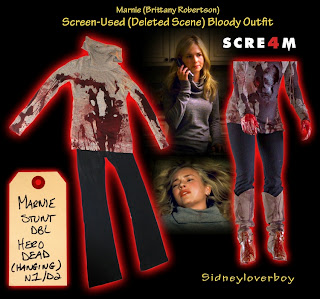 
This is a Hero Bloody Death Costume worn by Anna Paquin in her role as Rachel in Scream 4. The costume is extremely bloody and has a stab wound on the front from where Kristen Bell stabbed her. It is one of two complete bloody costumes worn in the scene but this one was worn second as she bled out and died. It cosists of a teal racerback style 'Brandy Melville' top, dark blue denim 'Old Navy' jean shorts, and black and white lace up the front 'Converse' shoes. all three articles of clothing are bloody The costume comes with it's original COA and wardrobe tag from Premiere Props. 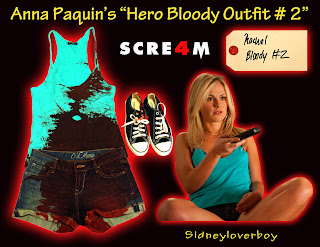 This Bloody Outfit was used when Ghostface was stabbing Olivia on the Bed. Comes W/ COA from Premiere Props 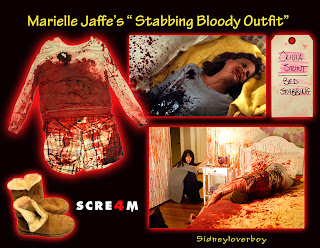 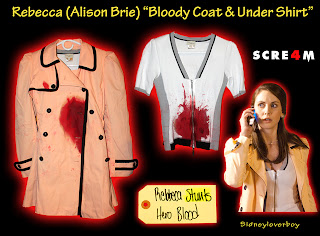 This is the headset camera prop used by Robbie (Erick Knudsen) throughout the film.
Prop has minor scratches around cam and the little button on top is pushed in, which probably happened during filming. Comes with C.O.A. 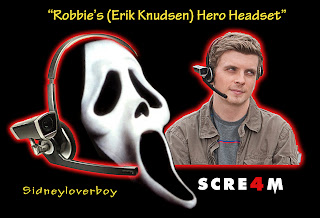 My next post, I will start to add the rest of my collection, including masks, knives, lobby cards, and more.